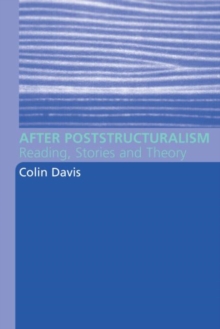 Product description In the last decades of the twentieth century, French poststructuralist 'theory' transformed the humanities; it also met with resistance and today we frequently hear that theory is 'dead'. In this brilliantly argued volume, Colin Davis: *reconsiders key arguments for and against theory, identifying significant misreadings *reassesses the contribution of poststructuralist thought to the critical issues of knowledge, ethics, hope and identity *sheds new light on the work of Jean-FranÃ§ois Lyotard, Emmanuel Levinas, Louis Althusser and Julia Kristeva in a stunning series of readings *offers a fresh perspective on recent debates around the death of theory. In closing he argues that theory may change, but it will not go away. After poststructuralism, then, comes the afterlife of poststructuralism. Wonderfully accessible, this is an account of the past and present fortunes of theory, suitable for anyone researching, teaching, or studying in the field. And yet it is much more than this. Colin Davis provides a way forward for the humanities - a way forward in which theory will play a crucial part. Review "Davis reminds us that poststructuralism doesn't spell the death of philosophy or of Western civilization; rather, poststructuralism holds the door open to allow new questions to enter the unfinished project of modernity." -- David Bockoven, Postmodern Culture About the Author Colin Davis is Professor of French Studies at the University of Warwick. His publications include Levinas: An Introduction (1986), Ethical Issues in Twnetieth-Century French Fiction (200) and French Fiction in the Mitterand Years (with Elizabeth Fallaize, 2000).