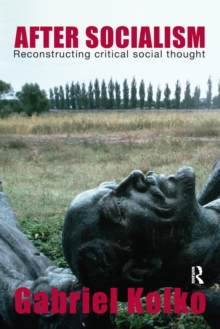 Product Description Does socialism have a future in the world of the twenty-first century? If not, what is the future for progressive politics? This is a major contribution to contemporary social and political thought written by one of the world's leading critical historians. Gabriel Kolko ask the difficult questions about where the left can go in a post-Cold War world where neoliberal policies appear to have triumphed in both the West and the former Soviet bloc. In trying to answer this, he interrogates both the origins and development of socialist ideas and the contemporary dynamics of the globalized economy dominated by American military, culturalÂ and political might. While avoiding the temptations of either pessimism or utopianism, Kolko offers an original and practical solution about the way forward for a liberal politics. About the Author Gabriel Kolko is Distinguished Research Professor Emeritus at York University in Toronto. He is the author of thirteen influential books, including Anatomy of War, Century of War and Vietnam: Anatomy of a Peace.