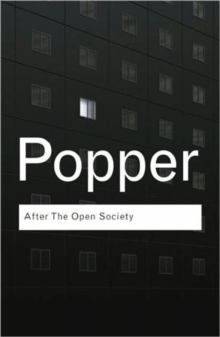 AFTER THE OPEN SOCIETY: SELECTED SOCIAL AND POLITICAL WRITINGS

Product Description In this long-awaited volume, Jeremy Shearmur and Piers Norris Turner bring to light Popper's most important unpublished and uncollected writings from the time of The Open Society until his death in 1994. After The Open Society: Selected Social and Political Writings reveals the development of Popper's political and philosophical thought during and after the Second World War, from his early socialism through to the radical humanitarianism of The Open Society. The papers in this collection, many of which are available here for the first time, demonstrate the clarity and pertinence of Popper's thinking on such topics as religion, history, Plato and Aristotle, while revealing a lifetime of unwavering political commitment. After The Open Society illuminates the thought of one of the twentieth century's greatest philosophers and is essential reading for anyone interested in the recent course of philosophy, politics, history and society. Review 'In sum, this volume deserves to be warmly welcomed by scholars of Popper. Summing up: Reommended' - CHOICE 'This book is excellent. It is largely unpublished material from Popperâ€™s literary remains regarding his The Open Society and Its Enemies that conveys some interesting stories about its publication and initial reception, throws light on its message, and complements it somewhat. The book also contains much that Popper hardly discussed elsewhere.' - Philosophy of the Social Sciences '[an] expert selection of archival materials and obscure publications...' - ISIS About the Author Karl Popper (1902-94), was one of the most influential and controversial thinkers of the twentieth century. Jeremy Shearmur is Reader in Philosophy at Australian National University. He is the author of Hayek and After and The Political Thought of Karl Popper, both published Routledge. Piers Norris Turner is Assistant Professor of Philosophy at The Ohio State University, USA.