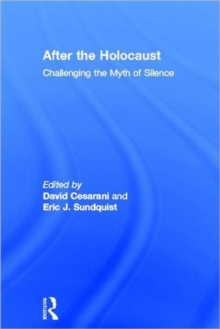 AFTER THE HOLOCAUST: CHALLENGING THE MYTH OF SILENCE

Product Description For the last decade scholars have been questioning the idea that the Holocaust was not talked about in any way until well into the 1970s. After the Holocaust: Challenging the Myth of Silence is the first collection of authoritative, original scholarship to expose a serious misreading of the past on which, controversially, the claims for a â€˜Holocaust industryâ€™ rest. Taking an international approach this bold new book exposes the myth and opens the way for a sweeping reassessment of Jewish life in the postwar era, a life lived in the pervasive, shared awareness that Jews had narrowly survived a catastrophe that had engulfed humanity as a whole but claimed two-thirds of their number. The chapters include: an overview of the efforts by survivor historians and memoir writers to inform the world of the catastrophe that had befallen the Jews of Europe an evaluation of the work of survivor-historians and memoir writers new light on the Jewish historical commissions and the Jewish documentation centres studies of David Boder, a Russian born psychologist who recorded searing interviews with survivors, and the work of philosophers, social thinkers and theologians theatrical productions by survivors and the first films on the theme made in Hollywood how the Holocaust had an impact on the everyday life of Jews in the USA and a discussion of the different types, and meanings, of â€˜silenceâ€™. A breakthrough volume in the debate about the â€˜Myth of Silenceâ€™, this is a must for all students of Holocaust and genocide. About the Author David Cesarani is Research Professor in History at Royal Holloway, University of London. He has written and edited over a dozen books, including Justice Delayed: How Britain Became a Refuge for Nazi War Criminals (1992; 2d edition 2001), Arthur Koestler: The Homeless Mind (1998), Eichmann: His life and crimes (2004), and Major Farran's Hat: Murder, Scandal, and Britainâ€™s war against Jewish Terrorism, 1945-1948 (2009). For his work in establishing a Holocaust Memorial Day in Great Britain he was awarded an OBE in 2005 Eric J. Sundquist is Andrew W. Mellon Professor of Humanities at John Hopkins University, USA. His publications include Kings Dream (2009), Strangers in the Land: Blacks, Jews, Post-Holocaust America (2005) and To Wake the Nations: Race in the Making of American Literature (1993).