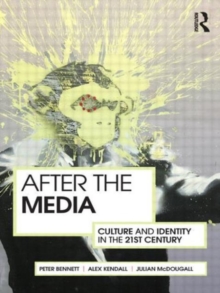 AFTER THE MEDIA: CULTURE AND IDENTITY IN THE 21ST CENTURY

Product description This provocative text considers the state of media and cultural studies today after the demolition of the traditional media paradigm, and engages with the new, active consumer culture. Media Studies, particularly within schools, has until recently been concerned with mass media and the effects of â€˜the mediaâ€™ in society and on people. As new media technology has blurred the boundaries between the audience and the media, the status of this area of education is threatened. Whilst some have called for a drastic re-think (Media Studies 2.0), others have called for caution, arguing that the power dynamics of ownership and gatekeeping are left intact. This book uses cultural and technological change as a context for a more forensic exploration of the traditional dependence on the idea of â€˜the mediaâ€™ as one homogenous unit. It suggests that it would be liberating for students, teachers and academics to depart from such a model and shift the focus to people and how they create culture in this contemporary â€˜mediascapeâ€™. Review 'A timely, vital, and passionate challenge to the institutions of media teaching, this book argues that many tenets of cultural studies have all-too-often gone missing here. Focusing on today's media students and their favoured texts, technologies, and fandoms, the authors inspire a people-centred rather than text-centred approach. The end result? You might just think differently about media studies after After the Media.' â€“ Matt Hills, Cardiff University, UK â€˜â€¦the content may be weighty and the arguments academic but it is also very readable, being enlivened with apt and entertaining quotations from both poets and theoristsâ€¦what is most impressive is the mix of erudition and enthusiasm, the view of change as opportunity, as liberation not threat, the focus on people and students. That is what makes After the Media an inspirational book.â€™ â€“ Media Education Journal, Liz Roberts â€˜The book deconstructs systematically the major concepts usually taken for granted in media studiesâ€¦ After the Media is a mash up of both, theories and conditions, in one single volume. And this makes it recommendable for any reader who does not feel comfortable with the old theories of media literacy and media effects under the current conditions of remixed popular self-produced culturescapes â€“ in particular, those who always wanted to know a little more about media culture and never dared to ask.â€™ â€“ International Journal of Media and Cultural Politics, Joan Ramon Rodriguez-Amat About the Author Peter Bennett is Senior Lecturer in Post-Compulsory Education at the University of Wolverhampton, UK. He is co-author and co-editor of a range of Communications, Media and Film textbooks as well as Framework Media: Channels (2003). He is co-author and Chief Examiner of the new Communication and Culture A Level and a regular provider of IN SET for teachers. Alex Kendall is Associate Dean for Research in the School of Education, Law and Social Science at Birmingham City University, UK. She is well published in the areas of literacy and professional education and is co-editor of Insights from Research and Practice (2005). Julian McDougall is Reader in Media and Education at Newman University College, Birmingham, UK. He is the editor of the Media Education Research Journal, The Media Teacherâ€™s Book (2010), Studying Videogames (2008) and a range of Media Studies textbooks. He is a Principal Examiner for A-Level Media and runs undergraduate, postgraduate and teacher training courses.